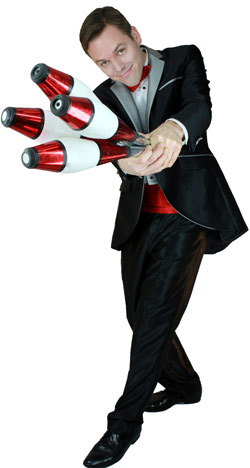 Beginning his performing career at the age of 17, Ben Burland has been wowing audiences and making people laugh for close to half his life. He attended Humber colleges comedy writing and performance program, Canada’s only full time college program for comedy professionals. He now combines his love of classic vaudeville skills with his unique self deprecating comedy style to create a one of a kind show.

Ben has become a favorite at events with his ability to gather huge crowds and keep them engaged. Whether it is a stage show or a “busker style” circle show in the round, the show is non stop action and laughs. Ben juggles various dangerous objects including knifes and a real bowling ball.  He balances precariously atop a giant unicycle and also  bicycle that is smaller than his shoe!. During the show he chooses volunteers from the the audience who he cleverly turns into performers to get everyone involved in the act.  He leaves his fate in the hands of the audience as they choose the implements of doom for the hilarious high flying  grand finale! His clever stunts and witty patter never fails to captivate audiences both young and old.

“Your show was witty, fun and entertaining for all”